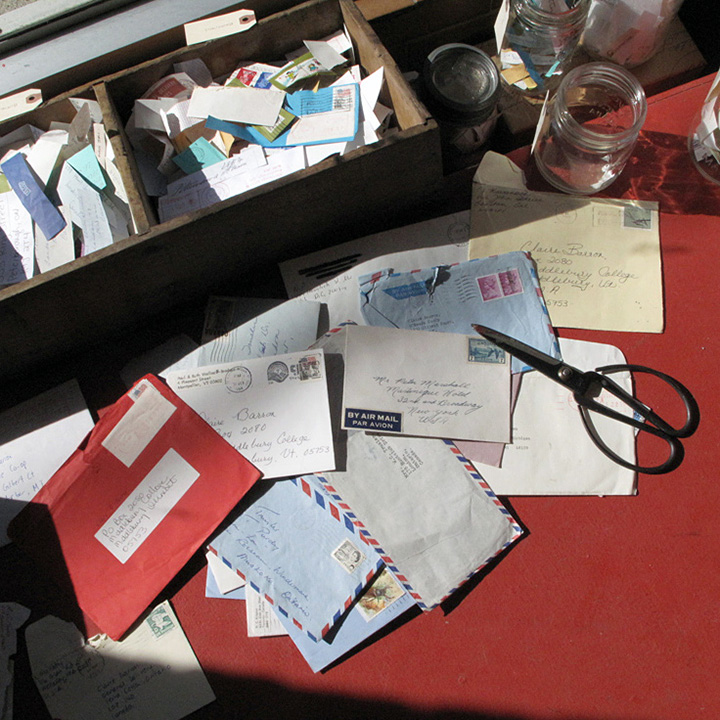 Voices at Hand began with the question why do we keep letters and an invitation to the public to donate personal correspondence to help me examine the essence of that question. The project’s debut was a month-long residency where I turned a Peterborough storefront into a studio, laboratory and stage. The response was a astounding. Intrigued by a ‘living window,’ the installation attracted many passers-by. Some returned daily to hear the engaging range of stories, personalities and ‘voices’ I encountered. Others followed the project through ‘Letters of the Day’ posted on the storefront window or via email updates.

Frequent requests from that residency include, a marriage proposal, a letter from a soldier in a WWII POW camp, volumes of cringe-worthy notes passed in class in the ‘90s and a joyous recounting of a reunion in the Channel Islands five days after Liberation Day. By its close I’d amassed 1608 letters.

Since then, I have mounted Voices at Hand at multiple sites, interacted with hundreds of members of the public, and reached people in 26 countries through the project blog and social media.

The letters have been sorted into 60 thematic, often playful categories—each providing an entry into a time and place, each with clues as to why the individual might have been compelled to keep the letter.

The way we speak to each other has always been in flux. As we step further through the electronic portal perhaps we need reminders of our shared humanity. As one letter written in 1983 ended:

“Remember letter writing is a dying art…Who knows, maybe our grandchildren won’t know what the word ‘letter’ means. The horror, the horror!”

Voices at Hand has been supported by Prime Data, Canada Post, Trent University and the Ontario Arts Council.